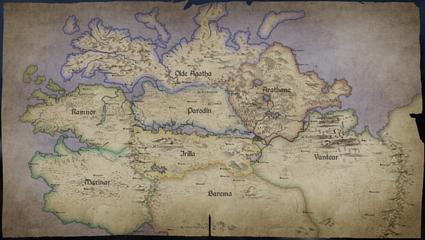 The continent of Agatha is a large continent situated north of the continent of Tenosia. Due to the death of King Alfonso Argon, ruler of Agatha, a power vacuum was created. Sensing opportunity, the Mason Order, led by General Malric Terrowin, eagerly filled the void. By the time of the return of the remainder of the Agathian army, the Masons and their loyalists controlled most of the eastern half of Agatha while loyalists supporting the dynasty of Argon held the west. This dispute led to the Agathian Civil War and Agatha as it is known today.

The continent of Agatha is connected by sea to Tenosia in the south.

Retrieved from "https://chivalry.wiki.gg/wiki/Agatha_(Continent)?oldid=4957"
Categories:
Cookies help us deliver our services. By using our services, you agree to our use of cookies.