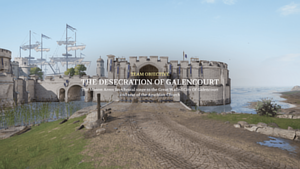 The Desecration of Galencourt opening scene.

The Desecration of Galencourt is a Team Objective-mode map that was released as part of Content Update 1 for Chivalry II. The map canonically occurs after the Fall of Lionspire, and involves a Mason attacking force destroying the tomb of Feydrid Kearn. The map is generally considered to favour the defending Agathian force, On the final stage, up to 12 defenders take on the role of the Battle Monks, a VIP class.

The game opens with a charge between the opposing forces outside of the city walls. As the fighting continues, four siege ramps will move up and extend to give access to the city walls. T The Masons must capture one of two points inside the city's walls. Two Catapults are also available, however these have limited ammunition (5 shots each). The left capture point is an open area and the approach is defended by two Ballistas. The right point is accessible both by a destructable gate (which can only be accessed after destroying some barricades) and by two siege ramps which provide access to a platform overlooking the capture point.

After the Agathian defenders are cleared from the outside of the walls, they will spawn between the two capture points and will need to travel between them to provide an effective defense.

No! The Lion's Roar is lost. It's mast is broken. Rally to The Gold Maid's defense! - Voice line played after the Masons' successfully ignite the explosives on the right ship.

The Masons must ignite the explosive barrels found under Agatha's two flagships, The Lion's Roar (right, from Mason's perspective) and The Gold Maid (left), which are moored in the Galencourt harbour. The ships can be destroyed in any order. The ships are nearly identical, though the explosive barrels for the Gold Maid can be accessed by walking through a room in the quarterdeck of the ship. After the explosives on the Lion's Roar ignite, its mast will topple over toward the Gold Maid and kill any players caught under it.

Place Explosives I and II

Following the destruction of the two ships, the Masons must destroy a series of two gates by bringing three explosive barrels into a zone immediately in front of each gate. These are two separate stages as the first gate must be destroyed before the Masons can access the second one.

The explosive barrels can be found scattered around the market in front of the first gate, as well as from a cart in the market. After the barrels are placed it will take a few seconds before they explode. The clock continues to run during this time and it is possible for time to run out if the Masons do not factor in this additional required time.

After both gates are destroyed the Masons gain access to a courtyard with 13 Agathian relics (statutes) scattered about that the attackers must destroy. Three relics are found under a cupola in the centre of the courtyard and, when destroyed, the cupola will collapse killing anyone nearby. The objective is completed once 12 relics are destroyed.

The Masons must destroy the door guarding the Agathian cathedralby attacking it repeatedly. Prior to Content Update 2, it was possible for the Masons to run around the objective and attack the door

The Battle Monks wield heavy maces as weapons, and have unique voice lines. As with other VIP classes, the Battle Monks are taller, have more hit points, and cannot be interrupted when making an attack. If a player dies as a Battle Monk, they will respawn as their previously selected class.

The Masons must destroy Feydrid's tomb, which is found at the rear of the cathedral. In addition to the previously destroyed doorway, additional doors on the left side of the cathedral have opened to grant flanking access. The cathedral also has an upper deck which extends part way. Two chandeliers hang over the central path in the cathedral, and can be dropped on enemies.

Place Explosives I and II

Defend the Gates I and II

Retrieved from "https://chivalry.wiki.gg/wiki/Galencourt?oldid=4735"
Categories:
Cookies help us deliver our services. By using our services, you agree to our use of cookies.