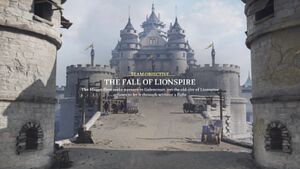 The Fall of Lionspire opening scene.

The Fall of Lionspire is a Team Objective-mode map that was released with Chivalry II. Canonically, the Mason Order wins the battle as a precursor to the Desecration of Galencourt. The map is considered generally well-balanced,

The capital city of Parodin, glorious Lionspire sat on the shores of Lake Gladstone, at a strategic narrowing between Parodin and Irilla that provides control over passage through the waters. The city guard welcomed the Agathian Knights openly.

Following an opening charge on the beach, the Masons must push one of two battering rams up to the city gates. This stage of the map features two Catapults and two Ballistas.

Once a ram is pushed up to the gates, the Masons must use it to destroy the gate. The ram must be used four times. Though there is a charge meter, it does not need to fill all the way. Players on the ram will be awarded 200 points per use. Two Constructable Ladders on the left side of the wall and a broken section on the right give the Masons access to the ramparts.

The Masons must capture the town square. Three alternate paths lead up to the square. There is a ballista overlooking the middle path which may be used to attack the square.

The Masons must battle their way up a bridge and destroy three banners on top of the overlooking gate. As the Mason’s approach, a triggered catapult shot will create an opening in the rightmost turret of the gate. Two sets of Constructable Ladders may be built on each side of the gate. A Barricade blocks the front of the gate.

The Masons must Ignite explosives placed under four Agathian trebuchets. Only two trebuchets, on the right and left sides of the map, can be reached at a time. Once the first two are destroyed, the other two will become accessible by way of Gangplanks as well as the centre keep’s dining hall, the doors of which will open.

The explosives must be defended after ignition for approximately 40 seconds each. After exploding, the Masons will receive an additional 30 seconds onto the c

lock. Because there is no overtime, if the Masons fail to ignite a remaining trebuchet with less than 40 seconds on the clock, they will lose.

Retrieved from "https://chivalry.wiki.gg/wiki/Lionspire?oldid=4897"
Category:
Cookies help us deliver our services. By using our services, you agree to our use of cookies.