Moor is a map for Team Deathmatch, Last Team Standing, and Free for All.

The map is a small valley with embankments on either side dipping off into a lowlands for the spawns, with a small Battlefield in the middle. Several manlets stand on both teams sides, providing cover for opposing archers. A fortified trench with small hills on either end is on the western flank, and several hills, forests and shorelines stand to the eastern flank. The Agathan spawn is placed in mining conplex with several large boulders providing cover, while the Mason spawn is a flat field with surrounding forests. 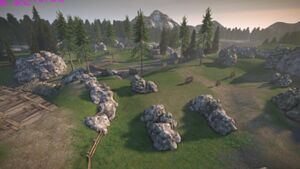 Retrieved from "https://chivalry.wiki.gg/wiki/Moor?oldid=4327"
Categories:
Cookies help us deliver our services. By using our services, you agree to our use of cookies.