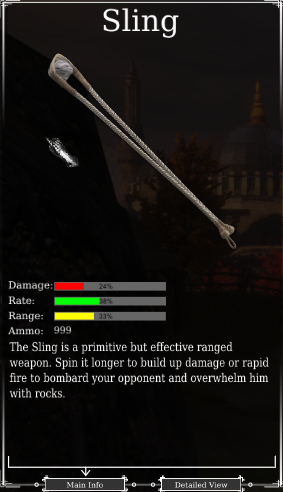 "The Sling is a primitive but effective ranged weapon. Spin it longer to build up damage or rapid fire to bombard your opponent and overwhelm him with rocks"

The Sling is a primary weapon for the Archer.

You can chose between Stones or Lead Balls as ammo. Stones have unlimited ammo and shoot faster, but Lead Balls do more damage.

It can be a weapon of unpredictability, the weapon gives you a huge gap to make a mistake whenever you miss a target if you pick the Stones. The damage is weak but sometimes confuses the enemy if the projectile is going to hit them.

It does Blunt damage with each shot, making it a good anti-knight weapon. This weapon is recommended if using the Cudgel as an anti-knight weapon doesn't suit you and you tend to use sharp secondaries like the Saber to finish off MAA & Archers. To kill an Archer, you need 3 hits with the Sling (Stones)

If you are using this in Duel mode, Lead Balls will come in handy since you don't really need that much ammo.

It was implemented in the January 2013 patch.

In open beta, the sling had a 999 ammo count. It is the first ranged blunt weapon in the game.

Retrieved from "https://chivalry.wiki.gg/wiki/Sling?oldid=3815"
Categories:
Cookies help us deliver our services. By using our services, you agree to our use of cookies.