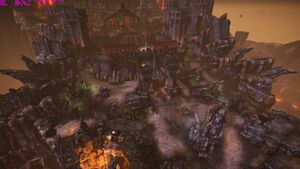 The Citadel is the main stronghold and military headquarters of the Mason Order. It was built on an active volcano; molten lava can be seen all throughout the fortress. King Malric and his General, Sir Teach, rule from here.The fortress itself has been divided into five separate areas; the Approach, the Forge, the Mines, the Courtyard, and the Throne Room.

The Approach exists in the form of a gully inhabited by a pair of black stone towers and volcanic rock formations. The objective of the defenders is to hold the palisade wall; this means denying the attackers access to their two ballistae. Besides blade and bow, the defenders have two pots of burning pitch positioned above the center flank. The attackers may either attack straight down the middle through the portcullis or through the destroyed wall on either side of the area. Once they have gained entry to the Mason controlled sector, the attackers must ascend up the gatehouse and secure the Mason ballistae. Once acquired, the ballistae must be turned completely around and brought to bear on the palisade wall. Once enough bolts have been fired into the wall, it will fall, allowing the attackers access to the next area.

The Forge represents one of the high summits of Mason atrocities, both in defensibility and in barbarity. In this section of the map the Order has put many captured Agathains to hard labor, forcing their prisoners to create weapons and armor to feed the hungry Mason war machine. The objective of the defenders is to prevent the attackers from destroying the locks on the slave cages. The attackers have three vectors of attack similar to the Approach; four doorways lead to the first floor and staircases on either side lead to the second. The first floor of the area has five cages; two locks per cage. The damage is shared between locks. The second floor contains three cages; one on either side and one in the center. It should also be noted that there are two staircases on the first floor to allow access to the second. Once all locks are destroyed the attackers gain entry to the next area.

The Mines are the pinnacle of the Mason cruelty; dozens of Mason slaves work, mining ore and stone from a quarry on the western side to be converted into materiel. The attackers must spread out across the entirety of the area and free the slave laborers by breaking the wooden posts binding them to their positions. The defenders must prevent this from happening, lest they deal with a slave revolt. When the attackers have freed all of the slaves, they will revolt and create an entrance to the next area by destroying almost the entirety of the front wall with their construction equipment.

The Courtyard is the beginning of the fortress proper; the castle itself and its surrounding buildings make up the last bastion of the crumbling Order. The objective of the attackers is straightforward; destroy the doors to the castle and gain entry. The attackers may attack from any direction; the defenders must prevent the doors from being destroyed. Once the doors are destroyed the attackers gain access to the final area.

The Throne Room is the point of final stand of the Mason Order and their last hope for survival. The attackers have a very simple objective; go in empty handed and come out with Malric's head. The defenders must prevent this at all costs. Victory is achieved by either slaying Malric or by defending long enough for the timer to run out at any stage of the battle.

Retrieved from "https://chivalry.wiki.gg/wiki/Citadel?oldid=4232"
Categories:
Cookies help us deliver our services. By using our services, you agree to our use of cookies.