The Heavy Javelin is a variant of the Javelin that trades range for high damage and stopping power. It excels at mid to close range, and doubles as a reasonably effective melee weapon.

In theory, this weapon is a Vanguard's nightmare. It boasts immense, ranged, piercing damage against their shieldless, pierce-weak armor. The heavy javelin is a relatively consistant one-hit-kill on Vanguards if it lands in the torso area even from a complete standstill. However, this comes at the cost of an abysmal trajectory and one less throw than the standard Javelin.

Compared to the other javelins, this one fares the worst in close combat due to the long, easier to interrupt animation of the stab and remains primarily a throwing weapon rather than a true hybrid. However, the increased damage helps in close combat if you can manage the hit.

The Heavy Javelin's damage is velocity based and as a result, sprinting and then hurling the javelin causes it to fly farther and deal signifigantly more damage.

It should be noted that the Javelin type weapons have had their recovery time increased since the Chivalry: Medieval Warfare Beta. It will take a few seconds to bring up your next Javelin or secondary weapon after a throw. You will be helpless against a close-range assailant in the meantime, reducing the effectiveness of the Javelin class.

It is possible to negate the long recovery time by quickly switching to your secondary weapon, and switching back to the Javelin.

This javelin bears a signifigant resemblence to the roman "Pilum", a heavy throwing weapon designed to penetrate and drag down enemy shields. 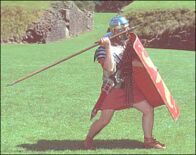 Retrieved from "https://chivalry.wiki.gg/wiki/Heavy_Javelin?oldid=2405"
Categories:
Cookies help us deliver our services. By using our services, you agree to our use of cookies.